"Perhaps looking at the universe through information-tinted spectacles will open us up to blindingly obvious solutions that make the problems we encounter today melt away."

I do wish the New Scientist would stop claiming they are talking about reality. It is hype to claim authority over all other human endeavour. 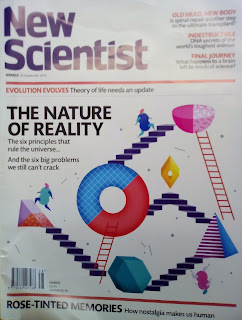 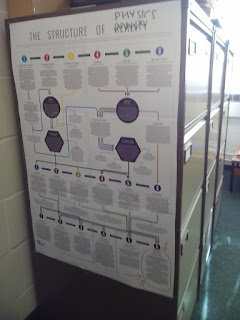 Nevertheless, this: "Six Principles / Six Problems / Six Solutions" (New Scientist, 24 September 2016 pp28 -35) is great. They call it 'The Nature of Reality' on the cover (and "The Structure of Reality" on the poster), but what it really (!) is, is an overview of the state of physics.  They have put it together as a poster you can download from here bit.ly/physicsposter (which I have done, printed out, and put on the side of a filing cabinet in my office.)

It starts from what they call on the cover "six principles that rule the universe' but inside the magazine are, more reasonably, "six basic principles that underlie our theories of physics on scales large and small". It follows these through to six problems and then to six (possible) solutions. So:

Six principles
THE SPEED OF LIGHT IS A CONSTANT. Nothing can exceed this cosmic speed limit
THE EQUIVALENCE PRINCIPLE . Gravity and acceleration always look the same
THE COSMOLOGICAL PRINCIPLE. The universe is the same in all places and in all directions
QUANTISATION. Things come in bite-size chunks
UNCERTAINTY. There’s a limit to how much any of us can know
WAVE-PARTICLE DUALITY. Quantum objects exist in many different guises at once

Six problems
DARK MATTER. Galaxies rotate too quickly for their visible matter
DARK ENERGY. The universe is flying apart faster and faster
INFLATION. Faster-than-light expansion spawns many other universes
FORCE UNIFICATION. Our theories of reality don’t get along
FINE-TUNING. We can’t explain the numbers that rule the universe
MEASUREMENT. Do we inadvertently control everything that happens?

Six solutions
MODIFIED GRAVITY. Our theories of gravity have only ever been tested on small scales
SUPERSYMMETRY. More particles can explain why the universe is as it is
FIFTH FORCE. Could a quintessence banish cosmic ghosts?
STRING THEORIES. An ultimate theory must subsume quantum theory and relativity
THE MULTIVERSE. The universe is as it is – because every other universe is out there too
INFORMATION. Energy and matter don’t matter – information is where it’s at

And there we have it, at the bottom: information might be the solution!

But as long as aspects of quantum theory such as the measurement problem remain largely inexplicable, there’s always the chance it is the wrong’un, or just an approximation to some deeper theory. What’s truly pulling the strings of entanglement, for example? The world embodied by quantum theory is not the most entangled world out there – other, even weirder worlds exist in theory that have even greater degrees of correlation. Why this entangled, and not more?

That might be another fine-tuning issue. But entanglement does seem to be at the root of many mysteries, and there are recent hints that it could be the warp and weft that holds space and time together. In that case, what is entanglement? The best we can say is that it’s some sort of collective information shared between particles.

That highlights a common theme in much cutting-edge physics: that understanding space-time, and the route to a more unified picture of nature generally, lies in treating information – not matter and energy – as the most fundamental thing in the universe and understanding better how it works.

Perhaps looking at the universe through information-tinted spectacles will open us up to blindingly obvious solutions that make the problems we encounter today melt away.